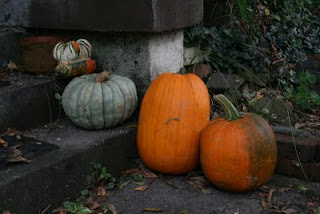 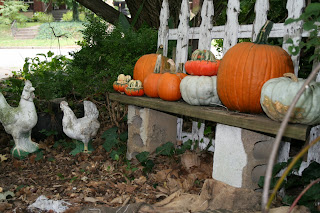 These are the pumpkins I bought a few weeks ago. They are very nice in my crazy yard. They look especially nice with my concrete chickens.
I went to Covington again Sunday, this time for gourds. My brother, sisiter in law and I drove to Ripley for lunch at Emily's Restaraunt (did I spell that right?) and that was a real experience with the locals. Then north to the farmer's house off old highway 51. He's been selling those pumpkins, by god, and had only a few left. It was very middle America, too. A sign offering the remaining goods for $1 a pop and the "honor box" to place the funds in.
That kind generous man drove up while we were there lusting over those orange vegetables. We remarked about the lack of gourds, so he in turn remarked about the dismal season for growing such things--cool rainy summer, nearly unheard of in these parts--then proceeded to take his tractor to the field to see what was available.
My brother and I indulged ourselves in some walnut bowling, after we realized there were two large trees whose fruit had fallen to earth, while waiting for the farmer to return. Which he did with six very nice fresh gourds. He offered them to us for $1 a piece (a bargain for sure!) and admonished us more than once of their fragility as we cradled them and gently placed them in the back floorboard of my truck. I have 3 very nice gourds. Hurray!
Posted by Marilyn League at Monday, October 19, 2009 1 comment:

The day we've been waiting for has come at last and I'm still undecided. Three candidates are on my short list (of the LONG list of yahoos running for mayor). I will make up my mind in a few hours and fulfill my obligation/responsibility/rights as a citizen and vote.
The show at GPAC is looming and I have all my art work and accompanying title signs, hanging devices, and such mounted ready to go. I'm thinking of postcards but have no clue how to get them printed. After looking at websites, such as Modern Postcards and GotPrint, I am totally confused---bleeding edges ?!?--what's that?? Something else to make my mind up on quickly.
Posted by Marilyn League at Thursday, October 15, 2009 No comments: 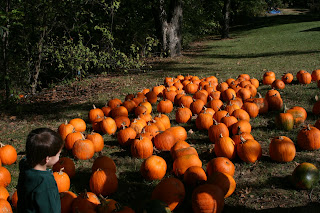 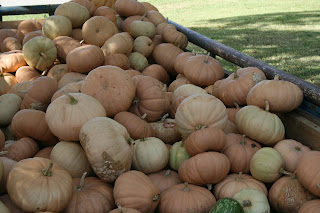 It's all pumpkins, all the time these days. Actually these photos are from last year, but you get the idea.
Posted by Marilyn League at Tuesday, October 06, 2009 No comments:

Progress is being made here at the ranch. But I wish my house was clean. And the garden weeded. There are plenty of quilts to choose from for the GPAC show and I must find time to make all the signs for the pieces. And cut the wood strips to hang them.
Vincent and I went to Covington to visit the Noodleman's last Sunday. We had a very nice drive in the country on the great pumpkin hunt, which was a raging success. My yard has lots of very nice pumpkins of all sizes and shapes now! I'll try to grab a moment before the rain comes (again!) and take some photos. The pumpkins are quite lovely and it was very hard deciding which ones to get. The farmer had so many and he's such a nice guy and I have such a big pickup truck.........
We're going back Sunday after next to get gourds, maybe a couple more pumpkins, maybe.
Posted by Marilyn League at Thursday, October 01, 2009 No comments: