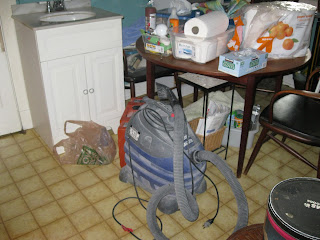 The long awaited and overdue bathroom renovation has begun. The guys came on Thursday morning bright and early and started dismantling everything. I had already removed lots of stuff--the cabinet, the stuff under the vanity, shower curtain and rod, and about a fourth of the wall tiles.
They took out the medicine cabinet, which  I have repainted and plan to put back in. It's actually quite pretty and I like the idea of maintaining the vintage look of the bathroom. There was a block of wood behind the cabinet on which was written the name of the tile setter and the date he worked on the room. October 30, 1934.
When they took out the tub, they were astonished at the lack of support under it. All the wood floor joists had rotted away long ago and all that was holding up the tub was the cast iron drain pipe and the actual position of the tub. It had wedged itself into the wall a long time ago. There is a date cast into the tub from the foundry where it was made. The date was in 1923, so this was the original fixture for this house.
While I painted the medicine cabinet and the cover for the air vent, the guys continued the demolition. Everything is ripped out to the studs. All the old tile is gone and all the plaster except for the ceiling. The wall from behind the tub has been rebuilt. The window was really rotted away too and has been repaired. A new window will replace the old one. It is beautiful and is exactly what I described to the contractor. He had it custom made. The workers have been thoughtful enough to replace the potty in the afternoon, so we have facilities for the evening. Bathing is a challenge, but manageable so far.
It's all a wreck right now, but I know at the end of this upheaval there will be a beautiful, structurally sound bathroom, that will look just like the picture I have in my mind.


Earlier today, I went back and found a blog posting from March 9, 2009 that has a photo of the bathroom after I had replaced the toilet, vanity and repainted. It was kind of like putting a bandaid on cancer. I think that is the only good "before" picture I have. Right now the room reminds me of a scene from a Japanese horror movie. A gleaming white toilet sitting in the center of destruction.
Posted by Marilyn League at Saturday, September 29, 2012 1 comment:

Back to Art for a Bit

Since the sewing has been very slow these days, I have had the opportunity to work on some of my more artistic endeavors, such as art quilts, artist trading cards, and postcards. This is a good thing.
On Mondays, I meet up with the girlz to sew and chat. This is a wonderful activity and many of the women there are also part of other more structured groups I belong to. This is the primary place where I work on my art quilts. The community center has great lighting and big tables. Sometimes I bring my machine and other times I just bring hand work, depends on the weather.
I haven't spent much time lately dyeing or screen printing any fabrics and really need to get my head back into that. What I've been doing lately that I enjoy is quilting with block letters and writing all sorts of words and phrases on the quilts, in addition to using other quilting designs. The look of the writing makes for an interesting texture, especially when the letters are jumbled around and you can't actually read what it says.
Here are the long promised photos of the quilts I made and have been a little uneasy letting the whole world see them. This is a big step for me. These were not quilted with writing. The fabric used in these was screen printed about a year ago.  I feel that I am still in that emotional place and would like to be in a different place now. I still have two more pieces that are not finished. I'll show those later on this year when they are done. They use the same printed images and have writing as the quilting design.
Also, I will show you the recent ATC with the stamps I carved for the design on the cards. The carving is done on some stuff that is similar to eraser material. It was purchased at The Art Center, one of my favorite places. The theme this month is "What's in Your Heart?" The smaller heart is separate and is supposed to look as if it is inside the broken heart, trying to come out. The stamp for that is an eraser.

Today I dove headfirst into the modern age by entering a quilt show online. It was the first time for me and quite nerve wracking, I must say. Since I am not computer savvy, I'm always afraid I will spend an enormous amount of time typing in information, loading photos that I am never sure are the correct size (I still haven't figured out the whole pixel thing) then with the swift press of a button lose it all to the wasteland of the interwebs, never to be retrieved again except by some master hacker.
It was a bit of a relief to get the confirmation emails. Now I will have my fingers crossed waiting for the news that my entry has accepted---or not.


Friday, Saturday, and Sunday morning were spent in further celebration of birthdays in September. Virgo gathering at the Levitt Shell, with friends at the Cooper Young Festival, and yummy brunch with a good friend to celebrate her birthday. Busy weekend.
Posted by Marilyn League at Sunday, September 16, 2012 No comments:

What a great trip to the midwest!! The Noodlemans and I took the Mega Bus to St. Louis on Friday morning as planned and arrived there around noon. From Union Station, we rode the Metro Link train out to Clayton. The art fair is actually held in Clayton, MO, a suburb just to the west of St. Louis.
The hotel had my room ready early so we dumped the luggage and rode the train over to Brentwood shopping center and found the Trader Joe's after walking the Bataan death march it seemed. It was pretty warm on Friday and the humidity was awful. But being the bunch of big kids we are, we survived and bought snacks and wine for our stay.
On the way back to the Metro Link station we found the short cut so the walk wasn't as far. There was a little Asian restaurant near the station where we had a late lunch. And it was very YUMMY!!
Back on the train, we looked at the sky and saw the predicted thunderstorms rolling in. We got back to the hotel just in time, too. Thunder, lightening, buckets of rain, the works! The weather people on tv were reporting tornadoes in the outlying counties, kind of scary. The art fair was scheduled to open at 5 pm, but was canceled for Friday evening. Once the rain let up around 9 pm, we ventured out to a sushi place half a block away from the hotel and Mr. Noodleman ordered a roll that was served on FIRE!! Too cool...it is called the "Oh My God" roll. For good reason, I might add.
Saturday we awoke to a perfect day to be outside. High temps in the mid 70's, sunny and breezy. Lots of beautiful things to look at and purchase. Great music.Yummy food from local eateries and the most amazing people watching two judgmental women (Mrs. Noodleman and I) could ask for.
We took a break in the late afternoon, then went back for more art and music. Earlier we made reservations at the primo Italian joint near the hotel, so at 8 pm we were shoveling more good food into our gobs. Even though we had walked all day and a half, I think we took in way more calories than we burned off.
Sunday we headed out to catch the Mega Bus back at Union Station. We had a little time to kill there so we got to see some of the scenery there. Back on the bus and back to the real world--boohoo....now I have to starve myself to regain my svelte figure. 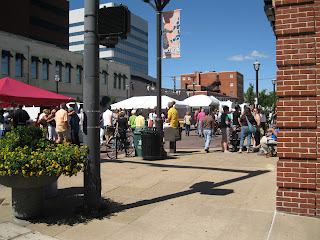 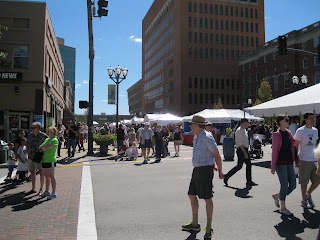 I have had one hell of a birthday celebration so far and it is not over.
Posted by Marilyn League at Monday, September 10, 2012 No comments:

On Labor Day I had my birthday. I am 60 years old. Many days were spent beforehand wondering what I had to show for all these years. The conclusion to this pondering is that I have many good friends. They have helped me celebrate this milestone of my life on this lovely planet and have wished me well on the journey. In the perfect world, I will return all these favors.
Fortunately, I have very good health, and look forward to many more years, whether I like it or not.  The last few days I have had more than my fair share of resources and there are celebrations planned for the rest of the month. woohoo!

On Friday, I'm off to St. Louis with the Noodlemans to attend the Art Fair and have an urban adventure. We are taking the Mega Bus and will be at the mercy of public transportation for three days. How socialistic!!! I have planned a side trip to Trader Joe's via Metrolink and who knows what will happen.
Posted by Marilyn League at Wednesday, September 05, 2012 5 comments:

Last night, what was left of hurricane Isaac passed through this burg. We were grateful for the rain we got, but had wished for a little more. And grateful the winds didn't do any major damage here, just a few branches knocked out of the trees. I broke them up and put them on the pile for a future date inside the fire pit the next time the grandson comes over.
I still haven't screwed up the nerve to post photos of some of my recent art work. Haven't even taken pictures of any of them. Maybe on Monday.
Posted by Marilyn League at Saturday, September 01, 2012 No comments: