The end is near

The last few days of 2015 remain and I wonder if I should look back in retrospect, to divine some knowledge to help me construct a plan for the new year, or just say "Fuck it!" and get on with the day to day grind, with no mind to the imaginary boundary of time. Probably the latter.
One day blends into another anyway, it seems. This feeling can definitely be attributed to the lack of sunlight! I am so looking forward to getting back in the yard and watching things come up from the ground, becoming green. The raised bed should be ready for crops by the last frost date. The beds around the deck are settled and I will get myself together earlier this winter for peas and other early plantings.
I have a few art projects to accomplish during the upcoming crappy, cold days of January and February. I will be very happy to bury myself in some creative endeavors, as I must take my head in a completely different direction for awhile. That is the one retrospective analysis I've gleaned from my experiences this past year!!
So let's raise a glass to the new year, whenever it decides to start itself.....
Posted by Marilyn League at Monday, December 28, 2015 No comments:

Labels: fiber art, Life as I know it, Yardening

Less than two weeks before the BIG pesky winter holiday and the weather is nothing less than balmy. A lovely evening out here on the porch, all tidy and rearranged to my suiting. I was up early in a baking mood and gifted neighbors with goodies. I live in one of the best heighborhoods in this country and maybe that contributes to my ever present joyous feelings. Not a whiff of snobbery here, only good vibes all round.
With the coming new year, it comes to my mind if I should start anew somehow. This past year started off with many complications. Yet, I was able to weather through and wage a small unsuccessful  fight to keep my beloved grandson near me. I distracted myself in romantic endeavors which proved equally unsuccessful and somewhat disappointing. I'm calling 2015 the year of men. The year before was the year of family. Maybe 2016 needs to be the year of me.
Artistic projects have gone by the wayside, and that is problematic. I cannot let my creativity shrivel, as that would be the end of me......
So I leave you, dear readers, to ponder future efforts in a more productive arena, and fulfill my less carnal desires.
Posted by Marilyn League at Saturday, December 12, 2015 No comments:

The pesky winter holidays are coming closer, friends and loved ones! Since the last one, Thanksgiving, I have been a total slug, except for certain duties. I guess it was all the food and drink......yeah, right. One of the activities that got checked off my list today, was the annual holiday card. Photos were taken, downloaded to website, design chosen, sly and funny message added, order placed. Pick up, postage purchase, addressing of envelopes will ensue shortly.
I do love cards, sending and receiving! Two have arrived already and I feel like I'm falling behind. Other projects have fallen by the wayside in my stupor, and I must snap out of it, get to gettin' and all that. This past year seems like it has gone on for months and months, but is snowballing to its inevitable end.
The photo accompanying this post is a bit of a spoiler alert, yet I cannot resist showing Jerry in her best photobomb! 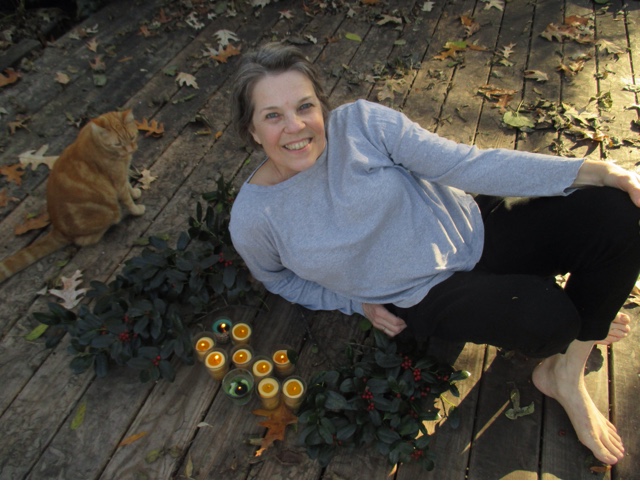 Posted by Marilyn League at Sunday, December 06, 2015 No comments:

So I bought the new sink and got it home, then realized I'd NEVER be able to install it by myself, so my son said he'd help me. Picked him up, got yummy breakfast and just a few hours late, I had a new kitchen sink!!! It is so awesome and I am sooooo happy!!
Little by little, I am making this MY house, MY home! Five years ago I would have never thought life could be so good. It's not perfect, but pretty damn good! 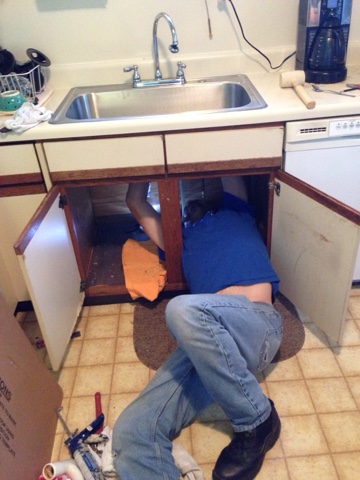 My boy under the sink, doing his best! 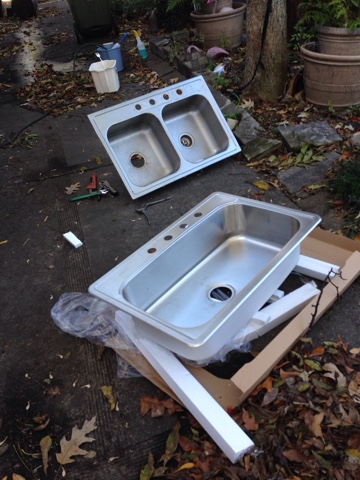 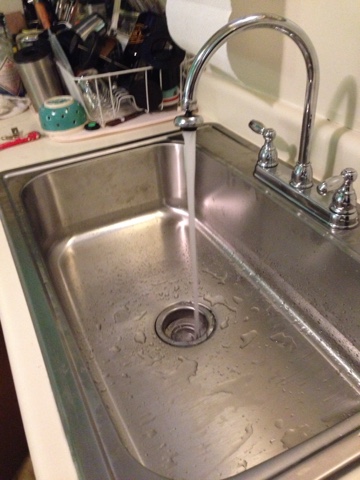 Posted by Marilyn League at Saturday, November 28, 2015 No comments:

Labels: Housework, Life as I know it

You know how it is when you watch all those shows on tv about changing your surroundings to your liking? And it costs thousands of dollars? And you get all those sweet pot lights and new appliances, countertops, and floors? Well, that's not happening here, but......I decided, because I can, to change a few things to make me happy.
A couple of weeks ago I changed the kitchen faucet to one I liked better, and was able to do it myself with only three trips to the hardware store. Thankfully, Home Depot is just around the corner.  The other day at the HD competitor, I saw the perfect kitchen sink ON CLEARANCE!!!!
Not sure of the size, I went home and measured then returned to the store, only to find that sink sold out!! Boo hoo......but there were the last two in Memphis at another store. Early, I mean EARLY, on this Saturday morning, the sink was mine. Somebody else can have the LAST one.
I know I'll have to reinstall the faucets, but that will be easy now that I have practice and all the required wrenches, Teflon tape, etc. Photos will be posted! 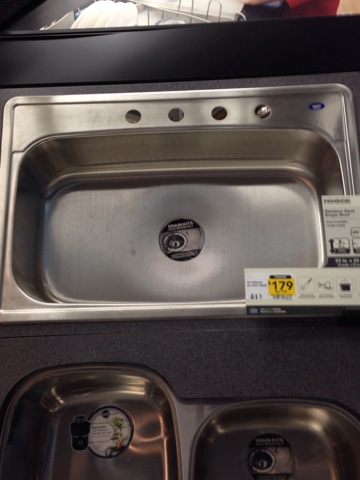 Posted by Marilyn League at Saturday, November 14, 2015 No comments:

Labels: Housework, Life as I know it

A lot has happened since April. The spring was lovely and lasted along time, then summer hit, BAM! Now we are in the process of another season. The leaves are raining down, begging to be swept up for a long winter's nap in the leaf pile and garden bed. The beds surrounding the deck were productive for the most part. The orange cherry tomatoes did the best. There was lettuce and collard greens till the heat and bugs came. Cucumbers and summer squash tried their best, but the borers sucked the life out of them. It was sad.....
Probably the best plants for the summer were the moon flowers. I'd never had any success with them before, but they performed beautifully all summer. Now I'm collecting seeds for next year. I'll put them near the front porch then, so they can entertain me in the late of the day while I'm sitting inside the screen.
Speaking of screens, the awesome tent I set up on the deck, got blown over one stormy afternoon. That was sad, too.....
But life moves along. It's a great feeling to wake up to it everyday and face life head on with joy in my heart.
Posted by Marilyn League at Friday, November 06, 2015 No comments:

Labels: digging, Life as I know it, Yardening

Yes, where have I been?

I didn't realize I had been away from my blog for such a long time. My, how time flies when one is having fun. The last post was in January of this year which seems so long ago. yet I continue to get through each day. I wake up, have coffee, read my horoscope and the funnies. On Sunday, there's the NYT crossword to while away the morning.
In February, life took a turn for the worse. My sweet boy was taken away from me and I am bereft of his presence, for how many more days is anyone's guess. I still wake up to each day to face what it will bring and manage to find something positive. I post photos and silly things on Facebook in a vain attempt to console myself. I miss his voice, his funny jokes and stories. I miss our morning routine of getting ready for school and the afternoon pickup. "How was your day?"
All my negative energy that was generated by his initial absence, got channeled into a home improvement frenzy. Thanks to Dr. Cooper for giving me such a gift. I guess 4 1/2 yrs of therapy has paid off!
I've painted nearly every surface in the front of my house-emphasis on MY-to suit me. Moved furniture to my liking. Built raised garden beds around the deck I built last fall. Got a tiny farm with yummy lettuce for sandwiches.
Still, I find myself at loose ends. I did start walking again, to get myself back into the great physical shape I once had, plus the mental outlet walking provides. There's nothing better for the soul than a fast paced stroll in the sun (or clouds) to turn around a somber mood.
There are better days ahead. That Pollyanna down inside me promises this will work out. I go back to court on May 13. Keep your fingers and toes crossed for me. 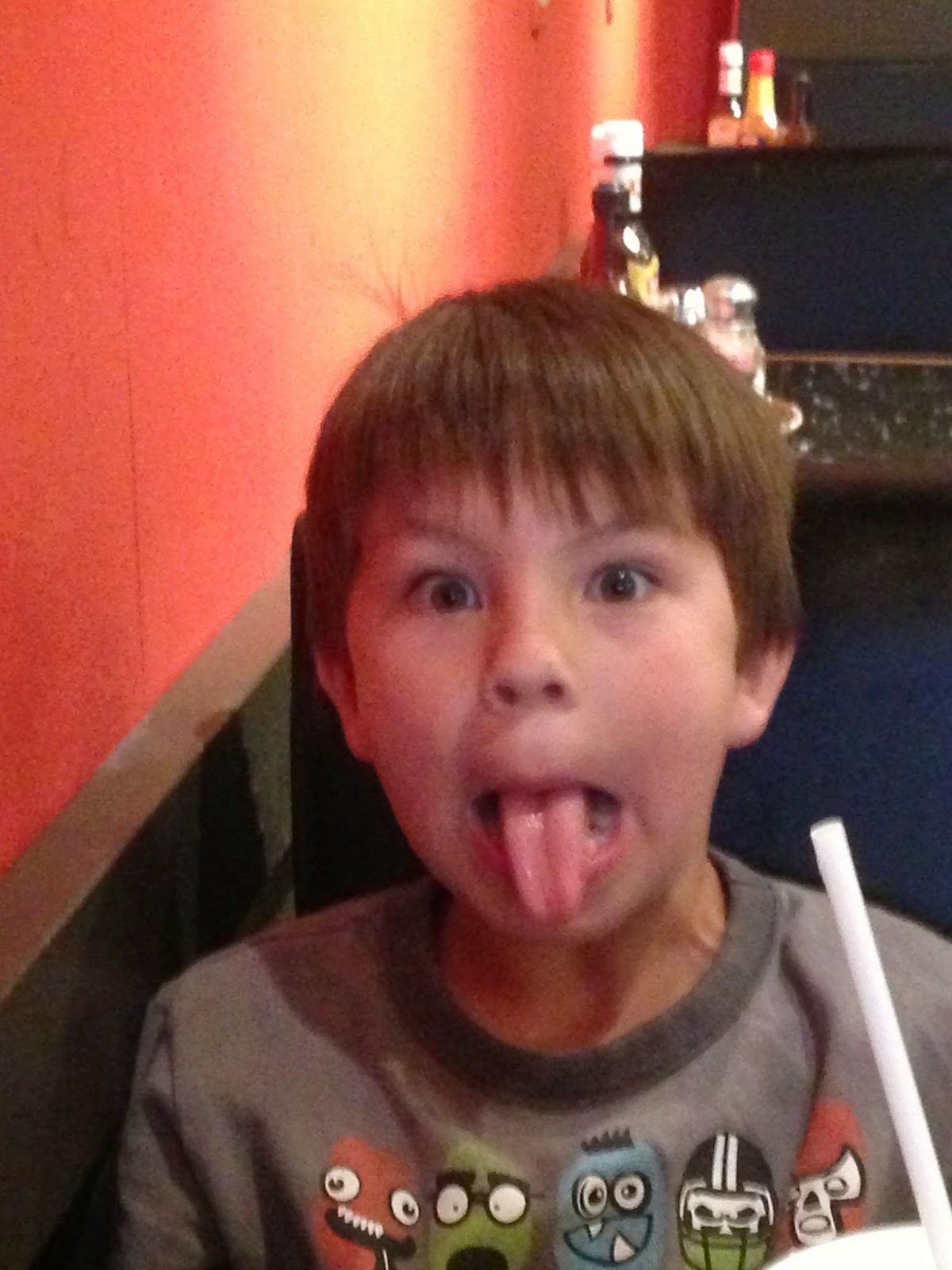 It's been forever since I last posted. 2014 was a crazy time adjusting to single life and getting my financials in order.
The Federal tax man still loometh over me, but after dealing with local bureaucracy this past year, I'm ready. Of course, this is no laughing matter. I have to get a firm footing on my responsibilities and since I got out the loop, so to speak, for so many years, it's an adjustment I have to make. I'm anxious as hell about it all, but we all need something to keep our blood pumping, eh?
The divorce was final one year ago January 15. You can't spend 20 years of your life and not have some residual effect. My grandchildren are here. Unfortunately, one of them brought his parents. But that's not his fault. They view my precious little boy as their golden ticket to a life of ease and irresponsibility. They are users in the worst way, always looking for a sucker. Some way to get what they need without too much effort on their part. That is a whole other story, volumes could be written in a psychological journal on those two.
Because of my long time in therapy, I have the insight to see this and help myself, in a most patient way. I choose to focus on the grandkids. And my own needs. Especially my need to be creative and productive.
I've spent much time over the year, indulging myself with big projects. I built a deck, which is totally awesome! There was a summer in January spell for the last several days, and I worked on the raised beds around the deck. The rest of my yard looks like shit, but that will resolve itself in time. The attic is finally getting cleared out. That is another story for a different day. Ugh......
Right now I'm concentrating on upcoming art shows and other projects. Now that my health is better, I have the energy to work on the backlog of all my ideas that keep me awake in the wee hours. (Did I mention I was under the weather for most of October and December? Yuck. At least I'm not in the hospital like I was a year ago!)
My art work is of great satisfaction to me now. I've missed being creative for the last several months. I'm trying to catch up on my trading cards, too.
So, here's to me.....survivor of the year!! Hahahahahaha. Life is good in general. Some days are pretty shitty, but the alternative is unthinkable.
Posted by Marilyn League at Tuesday, January 20, 2015 No comments: